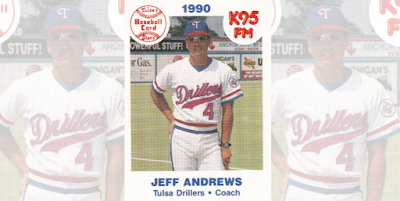 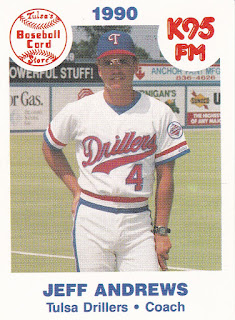 Jeff Andrews likes to hear how his pitchers do. But to him, that's not the best part. The best part, he told The Dallas Morning News in 2015, is getting them there.

"It's more fun being in the middle of the process," Andrews told The Morning News that July, "than what they become later - watching them learn, try new things and experience new things during the time we spend together, plus the relationships you develop with those guys. For me, it's more how they did it than what they've done."

Andrews has been developing relationship with minor league pitchers as a pitching coach now for nearly three decades in the Rangers, Pirates and Mariners systems. He's also spent one season in the majors, as pitching coach in 2008 with Pittsburgh.

Andrews' long career in baseball began as a player, taken by the Cubs in the 25th round of the 1981 draft out of East Tennessee State University.

Andrews' career with the Cubs lasted two seasons. He played 1981 at short-season Geneva, going 7-2 in 18 relief outings, with a 2.08 ERA. He then played 1982 at single-A Salinas, ending his playing career.

He started his coaching career by 1986, serving as a minor league instructor that year. He then served as pitching coach at single-A Charlotte and spent three seasons at AA Tulsa.

Andrews made AAA Oklahoma City in 1991, then returned to AAA with the Mariners at Tacoma in 1995. He served 2001 with the Marlins at AA Portland.

That April with Portland, Andrews watched over a young Kevin Olsen. Olsen went on to see time in three major league seasons. On this night in April 2001, Olsen picked up a win and praise from his pitching coach.

"He came out and got into a good rhythm and it carried him the rest of the way," Andrews told The Lewiston Sun Journal afterward.

Andrews joined the Pirates system by 2003, serving as pitching coach at AA Altoona. He made AAA Indianapolis in 2006, then Pittsburgh in 2008.

Andrews told The Altoona Mirror after his appointment to Pittsburgh that he didn't think he would ever make the majors. Pirates pitcher Zach Duke praised the selection.

"He’s a great pitching coach," Duke told The Mirror. "He's a guy that we're all very familiar with and we trust and we know he has our best interests at heart."

Andrews' stint in the majors, though, lasted that single season. He then returned to the Rangers system as pitching coach at AA Frisco for 2009. He continued there in 2015.