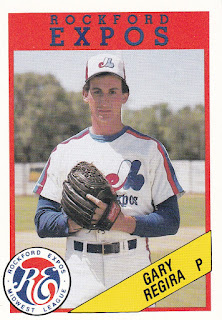 Gary Regira pitched well that year in 1989 at Nicholls State.

He led his Colonel pitching staff in strikeouts, with 103. He also tied for his team lead in wins, with 9.

From that season, Regira caught the eye of scouts from the Montreal Expos. Regira, though, couldn't turn that season into a long career. His professional career lasted just three seasons.

Regira's pro career began that season in 1989, the Expos taking him in the 23rd round of the draft, out of Nicholls State.

With the Expos, Regira played his first year between short-season Jamestown and single-A Rockford. On the year, he went 3-2, over 19 outings, five starts. He posted a 2.30 ERA.

For 1990, Regira returned to Rockford. Over 28 outings, three starts, his ERA increased to 4.23. He also picked up four losses and no saves.

Regira's third season found him at high-A West Palm Beach. But he got into just 12 games, 13.2 innings, with an ERA of 4.61. He also picked up a loss, taking that in a mid-April game. It was his final season as a pro.

Regira continues with the game, however. He is listed as a coach in 2013 with Suire's Baseball Academy in Louisiana. He's also seen a relative, Adam Falcon, follow him to Nichols State.