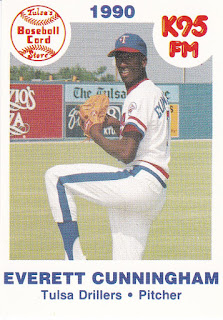 Everett Cunningham started 1989 at single-A Gastonia rough, to the point that the pitcher got pulled from the rotation, The Chicago Tribune wrote.

Then the organization gave him some time to get his confidence back, The Tribune wrote.

"He never looked back," Rangers minor league director Marty Scott told The Tribune. "Right then, you had to say, 'Wow, this guy could pitch in the big leagues."

Cunningham finished that campaign, his second in the pros, with a 9-5 record and a 2.52 ERA. He went on to play just two more seasons. He never made the bigs.

Cunningham's career began in 1988, taken by the Rangers in the fourth round of the draft out of Northwestern University.

He split 1990 between AA Tulsa and high-A Port Charlotte. Cunningham went 13-5 between them, with a 3.27 ERA. He pitched a perfect inning of an April Tulsa no-hitter.