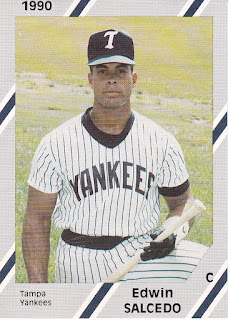 Edwin Salcedo showed what he could do in this July 1991 game for single-A Greensboro and he did so with two singles and a grand slam, according to The Greensboro News & Record.

"What a big blast," Hornets' manager Trey Hillman told The News & Record afterward of Salcedo's grand slam. "He's got the ability to do that a lot. He's young and fairly inexperienced, but with the kind of work ethic and attitude he has, he's got a shot to get some more playing time."

Though he hit that grand slam, Salcedo never seemed to get enough time on the field. He saw 33 games for Greensboro that year - 36 on the year as a whole. But he never saw more than 61 games in a campaign. He briefly saw AA, but he never saw the majors.

Salcedo's career began in 1990, signed by the Yankees as a free agent out of his native Puerto Rico.

Salcedo started with the Yankees in the rookie Gulf Coast League. The catcher hit .152 in 16 games.

He played 1994 between high-A Tampa and independent San Bernardino. He and teammate Derek Jeter each had three RBI in a May Tampa game. He hit .224 in 61 games on the year.