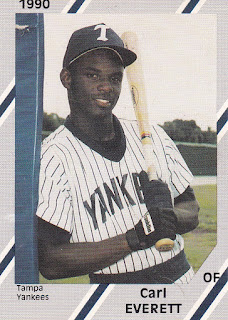 Traded from the Ranges to the White Sox mid-2003, Carl Everett explained to The Associated Press the kid of player he'd be in Chicago.

He also hoped to help his new club win.

"I'm going to go there and play the game I always play," Everett told The AP. "I play hard and I play to win. It feels good that a team like that thinks that I'm one of the missing pieces to their team."

Everett moved to the White Sox as a two-time All-Star, having had a decade in the majors already behind him. He went on to play in three more seasons - and, after a brief detour  help those same White Sox to the 2005 World Series title.

Everett also gained a reputation over his 14 seasons in the majors as being controversial.

Everett's career began in 1990, taken by the Yankees 10th overall in the draft out of Hillsborough High School in Florida.

Everett made AAA Edmonton that year. He also got an 11-game look in Florida. He saw another 16 games n 1994, before being traded to the Mets for 1995.

Everett made 79 games with the Mets in 1995 and hit .260, with 12 home runs. Everett then played that off-season in Venezuela. He got into an argument with an umpire in one game and then went into the stands. The incident got him banned from the league, The New York Times wrote.

"I don't think I have a history of this, but people have labeled me as having an attitude problem because I'm not verbal," Everett, who apologized, told The Times. "But when I do talk, I tend to say things that offend people when I'm angry."

"His numbers from the second half of last season showed he learned how to hit with power," Duquette told SI. "Plus, I believe Carl has matured as far as understanding what he has to do to be an elite ballplayer."

Everett played one more season with Boston, but his relationship with the club eventually soured.

In the 2005 World Series, Everett went 3 for 7 in the first two games and scored a run. He then finished out his career with the Mariners in 2006.