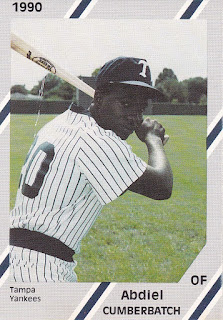 With two runs already in and two men on, Cumberbatch made it 4-0 on a triple. He then came around to score on a home run, The Sun wrote.

Cumberbatch hit that triple in his fifth season as a pro. But he only had a few games left. By May, his minor league career had ended. He never made AA.

Cumberbatch's career began in 1990, signed by the Yankees out of his native Panama.

Cumberbatch played 1992 largely at Greensboro. He hit .252 in 54 games. He also saw eight games at short-season Oneonta. He lost some time in June to chicken pox.