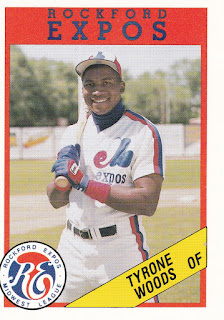 Norfolk Tide Jimmy Williams knew how dangerous Tyrone Woods could be at the plate. He just counted himself fortunate not to get stung by him on this April 1995 night, according to The Newport News Daily Press.

"The thing about Tyrone is, he can hit the ball out of the park at any time in the game," Williams told The Daily Press. "But with a 3-2 count, I just threw him a fastball for a strike and said, 'Here it is - hit it. See what you can do with it.'"

Woods wasn't able to do much with that pitch, grounding out to end the game. But, a few years later, Woods showed what he could do, in Japan and Korea.

In six seasons in Japan - his last in 2008 - Woods never hit fewer than 35 home runs in a single season.

Woods' long career began in 1988, taken by the Expos in the fifth round of the draft, out of Hernando High School in Florida.

Woods started in the rookie Gulf Coast League, moving to short-season Jamestown for 1989 and then single-A Rockford for 1990. He didn't make AA full-time until 1993, getting 106 games at Harrisburg. He hit .252, with 16 home runs.

"I started to hit every pitch (in Mexico)," Woods told Hernando Today years later. "I started recognizing what pitchers were trying to do to get me out. Once I learned that system, hitting became easy for me."

Woods never made Boston. But he soon found himself in Korea, after being convinced to attend a tryout in Florida, according to Today. Over five seasons there, he hit 174 home runs. He hit 42 home runs his first year there. He also won the league MVP award.

In October 2008, Woods saw one of his home runs become a game-winner, a two-run shot in the ninth against rival Hanshin.

"The top of the ninth inning saw a classic baseball confrontation between (Hanshin’s) ace closer Fujikawa and our cleanup hitter Woods," Dragons manager Hiromitsu Ochiai told The Japan Times afterward. "It was good we got the best of it, and that was the ball game."