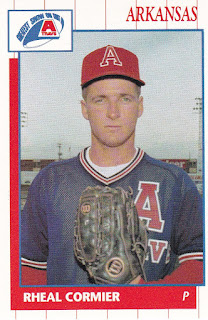 Already 13 seasons into his major league career, Rheal Cormier re-signed with the Phillies for 2005.

The contract covered two years and the team had an option for 2007, The Allentown Morning Call wrote.

"One of my goals is to pitch when I'm 40," Cormier told The Morning Call ahead of his 38th birthday. "I knew it wouldn't be easy. I keep myself in good shape. I'm the oldest guy on the team. I don't feel 38, I feel 30, and I have to keep that attitude. It's all about performance. If you perform, everyone is happy."

Cormier ended up pitching in the majors into 2007, though the final game of his 16-season career came just shy of his 40th.

Cormier did, however, continue pitching. In 2008, he represented his native Canada for the second time in the Olympics - 20 years after his first appearance there.

Cormier's career began in 1988, taken by the Cardinals in the sixth round of the draft out of Community College of Rhode Island.

Cormier grew up literally in a shack in New Brunswick, Canada, The Morning call wrote in 2001. He avoided hockey over the equipment costs. Instead, he got a baseball glove.

Before signing with the Cardinals, though, Cormier went to Seoul. Canada went 1-2 over the games.

He returned to Louisville to start 1991, then made his debut in St. Louis that August.

Cormier started 10 games for St. Louis down the stretch. He went 4-5, with a 4.12 ERA. He gave up six hits over 5.2 innings to pick up his second win of the year. He left that game after getting hit by a come-backer.

"Rheal is very vital to us," Phillies manager Larry Bowa told The Morning Call in 2001. "Big time. ... He has really been a bridge to the closer. What makes him extra valuable is he can work several innings because he gets right-handed batters out better than the lefties."

He then worked to prepare for the 2008 Olympics, rehabbing an injured shoulder in the process. By the time the Olympics came, Cormier even seemed to leave the door open for more, while being happy with what he'd achieved, according to The Toronto Star.

"Whatever (comes) after this is fine, and if it's the end of the road, that's great," Cormier told The Star. "I can't complain. I've had a great run, and at the same time, if there's more beyond this ..."

In 2009, he was back in New Brunswick, working with local children in a baseball clinic.