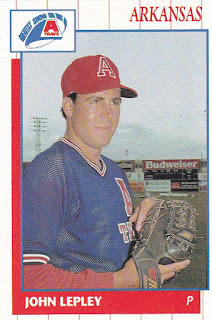 John Lepley proved a work horse for the Nebraska Cornhuskers over his time at the school from 1985 to 1988, according to the school's record book.

He made 70 appearances over that time and pitched in 264.1 innings, both numbers that came in second-best at the school at the time he left. He also had struck out 233, then a school record, according to the record book.

Lepley took his showing at Nebraska on to a career in the pros. He played four seasons, all four with time at AA Arkansas. He never made the majors.

Lepley's pro career began in 1988, taken by the Cardinals in the 24th round of the draft out of Nebraska.

Lapley started with the Cardinals between three levels, short-season Hamilton, single-A Savannah and AA Arkansas. He went 5-1 between them, with a 2.22 ERA. He saw 11 relief outings at Arkansas. He ended with one win and a 6.75 ERA .

At Arkansas in 1990, he went 6-4, with a 2.62 ERA in another 59 appearances. That August, he came into a game against Tulsa and helped his starter out of a jam. He also, along with fellow reliever Mark Grater, received praise from his manager Dave Bialas.

"Lepley and Grater did a great job in relief," Bialas told The Tulsa World afterward.