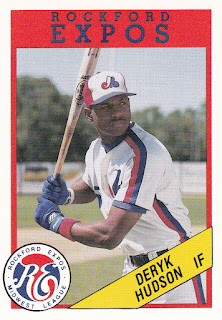 Deryk Hudson's Richmond Oilers ran up against a good pitcher in this April 2013 game, losing 13-1, according to Richmond Confidential.

But Hudson had some advice for them afterward.

"We have to learn to come out fighting and not come out on our heels," Hudson told his high schoolers after the loss, according to Richmond Confidential. "I'd like to see you guys swing at a lot more pitches. We're not swinging at enough pitches."

Hudson spoke having had his share of swings years earlier, as a professional in the minors, though likely not as many swings as he would have hoped. Hudson's pro career lasted just two seasons, never making it above single-A.

Hudson's brief pro career began in 1989, taken by the Expos in the 34th round, out of Cal State-Long Beach and Fullerton College.

At Fullerton, Hudson hit two home runs and knocked in four in an April 1988 game. At Long Beach, Hudson helped his team to a 1989 College World Series trip, knocking in four runs in the game that sent the club to Omaha. Earlier in the year, Hudson hit a double and a home run in a win.

With the Expos, Hudson played his first year at short-season Jamestown. He hit .311, with six home runs and 43 RBI.

Hudson has since gone on to coach high school baseball, serving as head coach at Richmond High School in California in 2013.

In another April 2013 game, Hudson's team edged out a 7-6 win, but a late surge by their opponent had Hudson concerned, according to Richmond Confidential.

"I thought that we played six-and-three-quarter innings of quality baseball," Hudson told Richmond Confidential afterward. "But we got complacent at the end because we wanted it to be over. Toward the end of the game you have to play the same way as the beginning. One of the hardest things to do is to finish anything."