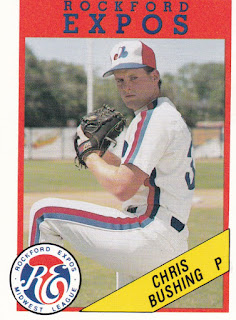 But the West Palm Beach Expo was also still looking ahead to, he hoped, eventually making the majors.

"I wouldn't give it up for nothing," Bushing told The Sun-Sentinel in June 1991. "If they didn't keep me around here I would try to go somewhere else. That's what I want to do with my life. I want to play baseball."

Bushing eventually had to do somewhere else, moving the next year to the Phillies organization and then to the Reds. That last move eventually got him to where he wanted to go, the majors.

Bushing's career began in 1986, signed by the Orioles as an undrafted free agent out of Broward Community College in Florida. He went to college out of South Broward High School.

Bushing's coach at South Broward praised Bushing's dedication after his signing with the Orioles, according to The Sun-Sentinel.

"When he played for me he constantly wanted to improve," South Broward High coach Lenny Koch told The Sun-Sentinel in July 1986. "He's a kid who simply loves baseball. It's his only sport. It's all he's ever wanted to do. And he's good at it because of that."

He then moved to the Expos system and single-A Rockford for 1990, then West Palm Beach for 1991.

Bushing played most of 1992 with the Phillies at AA Reading, taken by the club in the minor league draft. He was then traded to the Reds that August. He then played 1993 at AA Chattanooga. He got into 61 games there, with a 2.31 ERA.

Then, in September 1993, Bushing made Cincinnati. He got into six games in relief, 4.1 innings. He gave up six earned runs. It was the extent of his major league career. He then played his final game in the minors in 1995.