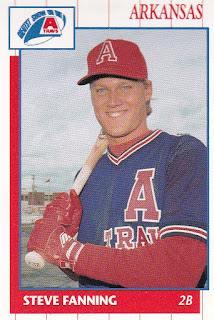 Steve Fanning stunned the Tulsa crowd at the end of this June 1992 game as he broke up a no-hitter on a clean single to center, according to The Tulsa World.

The hit made the previous pitch - a ball close to the strike zone that would have ended the game and sealed the no-hitter - a focus of Tulsa ire, according to The World.

"It was a pretty close pitch," Fanning told The World afterward. "I thought they were arguing over whether I swung or not. I didn't."

Fanning broke up that no-hitter in his fifth season as a pro. He went on to play in three more seasons. He made AAA, but he never made the majors.

Steve's Fanning's baseball career began in 1988, taken by the Cardinals in the seventh round of the draft out of Troy University in Alabama.

Fanning started with the Cardinals at short-season Hamilton. He hit .223 in 60 games. He then made single-A Savannah for 1989 and hit .265 there.

Fanning made AAA Louisville briefly in 1992 and then returned there for 65 games two years later. In between, he played back at Arkansas. In all, he played at Arkansas for parts or all of four seasons.

By the start of the 1994 season, though, Fanning had become a father. Dakota began acting at a local playhouse in Georgia. Soon, her talent became evident, an agent was suggested and the family moved to California, according to her IMDB bio.

After getting roles in commercials and some movies, she got her break 2001's I Am Sam.
She's gone on to star in multiple top Hollywood movies, including 2005's War of the Worlds and, later, The Twilight Saga. Daughter Elle Fanning has starred in Super 8 and Maleficent.

In 2014, Steve Fanning turned some heads himself at a New York Knicks game with Dakota. US Weekly wrote Dakota "showed off where she got 50 percent of her good looks" and bestowed upon the dad the title "hunky father," while including an image of his 1994 Louisville Redbirds card.

In June 2010, Dakota told NJ.com about her parents and their initial thoughts that she and Elle would be athletes. Their mother played tennis.

"They quickly realized that both my sister and I were different from what they had expected their kids to be," Dakota Fanning told the site. "And they supported that. Really, they sacrificed so much for us, basically gave up the life they had planned. But they wanted us to be happy. I remember them saying, ‘Find a job you enjoy doing so it’s not a job. Do what you love.'"
1990 Minor League Tally
Players/Coaches Featured:3,053
Made the Majors:1,122-36.8%
Never Made Majors:1,931-63.2%-X
5+ Seasons in the Majors: 466
10+ Seasons in the Minors:278
Posted by Steve78 at 8:00 PM