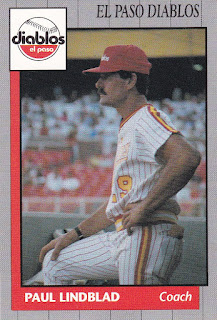 Amidst a dispute involving the commissioner about whether he'd play for the Rangers or the Yankees, for 1977, Paul Lindblad explained his family's preference to The New York Times.

The 12-year major leagure and his family lived in the Dallas area, so his family much preferred the Rangers, he told The Times.

"My kids jumped for joy when they heard about the deal" to the Rangers, Lindblad told The Times. "Let's face it. I'm 35. When you get to 35, you don't know how long you're going to play.. It's a year‐to‐year thing. The dream in my mind was to finish my career in Texas, right in my own backyard."

Lindblad eventually did arrive in Texas. Then he moved on to the Yankees the next year - and helped pitch the Yankees to the World Series title, the second of his career.

After his playing career ended, he went on to a brief career in coaching, one forced to end as he and his family learned that Lindblad, hardly past 50, had Alzheimer's disease.

Lindblad's career in baseball began in 1963, signed by the Athletics as a free agent out of Neosho County Community College in Kansas.

He started at single-A Burlington, then hit AA Birmingham in 1964 and AAA Vancouver in 1965. He also debuted that third year in Kansas City.

He helped the Athletics beat the Mets in the 1973 World Series. His relief work in Game 3, two scoreless innings, garnered him and Oakland the win.

His Game 3 outing also gave him the distinction of being the final pitcher to face Willie Mays. Mays grounded out.

In September 1975, Lindblad took part in a four-pitcher no-hitter. Lindblad pitched a perfect seventh to contribute his part. He pitched that year in the ALCS, but missed time in the World Series.

Lindblad spent two stints with the Texas organization, starting with Washington in 1971 and moving with the team to Texas in 1972. He returned to Texas for 1977 and into 1978, before arriving with the Yankees in mid-1978.

He saw his final time on the mound in Game 1 of the World Series with the Yankees. He gave up three earned runs in 2.1 innings of work.

Lindblad started his coaching career by 1987, with the Brewers at AA El Paso. He served 1988 as minor league pitching instructor. He then spent three more seasons at El Paso.

He continued coaching for two more seasons in the Mariners system, even as he was diagnosed with Alzheimer's. He served his final season at single-A Appleton in 1993.

He and his family then turned to his disease and it progressed quickly. Within a few years, he was in a nursing home. The Chicago Tribune featured him and his life there in October 1997.

"He's not here and it's very lonesome," Lindblad's wife Kathy told The Tribune, her voice cracking. "I'm alone now. The years that he was coaching and the kids were grown, we really had become such good friends. We did so much together. Now that's all been taken away."