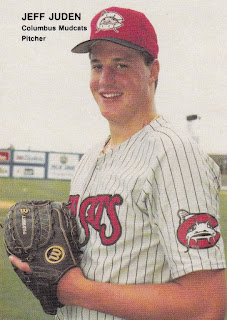 "Like most of us, he's unique, he's not like anyone else," Jones told The Journal Times. "His perception of the world around him is a little different than that of anyone else. He has his own way of thinking, his own way of communicating and he's not afraid to tell you what he thinks."

He had gained a reputation over the years as a hard thrower, but also gained the tag "unprofessional" from one manager.

But he saw time in eight total major league seasons and won 11 games for Montreal in 1997.

Juden's career began in 1989, taken by the Astros in the first round of the draft out of Salem High School in Massachusetts.

Juden hit the field with the Astros in 1990 and he moved up quickly. He started at high-A Osceola and soon saw time at AA Columbus. He also received early managerial praise.

''Jeff takes his job seriously. He has a killer instinct that all the good ones have,'' Osceola manager Sal Butera told The Orlando Sentinel in May 1990. ''When the chips are on the line, he can raise his game up a notch. Jeff has been at his best when the pressure's on.''

Juden then debuted in Houston in September 1991. He got into four games and gave up 12 earned in 18 innings of work. He then returned to Houston for two more games in 1993 before moving to the Phillies in 1994.

He saw six games in  1994 and 13 outings, 10 starts, for the Phillies in 1995. He threw a complete game and hit a grand slam in an August 1995 game. But his reputation had been cemented by then as his manager, Jim Fregosi, took Juden out of the rotation and responded harshly when Juden asked why.

"Because you're the most unprofessional player I've ever seen, you big, fat, lazy piece of garbage," Fregosi responded, according to The Baltimore Sun.

The Los Angeles Times later noted other aspects of Juden's career: He lost time for an infected tattoo and came out of a 1996 on-field brawl needing four stitches to his lip.

Juden responded to Fregosi's comments the next spring to The San Francisco Examiner.

"I'm very motivated by some of the comments my ex-manager made," Juden told The Examiner. "Nobody likes hearing that about himself in the newspaper. To have that kind of stuff come out in the paper, the way it makes me feel personally, that's Little League stuff. I've prided myself on doing the opposite."

Juden pitched in 36 games in relief for the Giants that year before being traded to the Expos. He got 22 more outings in Montreal and went 5-0 on the year.

He then played much of 1997 with the Expos and went 11-5 over 22 starts. Traded to the Indians in July, he got into eight more games.