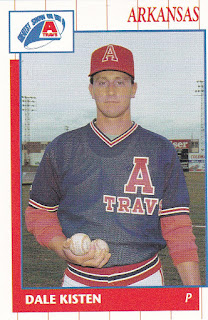 Named to Southern Illinois University's Hall of Fame in 2009, Dale Kisten recounted what helped gain him the honor.

He made it through his approach to pitching, he told The Southern Illinoisan.

"I wasn't a guy who threw super hard, but I always felt that as the game went on, I was more of a sinker-slider pitcher," Kisten told The Southern Illinoisan December 2008. "My ball moved a lot more as my arm got tired. That helped me go a little deeper into games, as I felt stronger. Back in my days, when I was throwing, they'd run you on the board until you got tired."

Kisten's pro career began in 1988, signed by the Cardinals as an undrafted free agent out of Southern Illinois.

At Southern Illinois, Kisten won conference player of the year honors in 1986. He picked up a win in a May complete game that year.

"I wasn't throwing too hard," Kisten told The Southern Illinoisan afterward, "but I kept the ball down and worked the ball around. I've been throwing with real good control."

Kisten started with the Cardinals between single-A Springfield and short-season Hamilton. He got a game at Springfield and 23 at Hamilton, all in relief. He turned in a 1.87 ERA overall.

"He has great poise, he holds runners on well and he throws strikes," Kisten's manager at Hamilton, Dan Radison told The Southern Illinoisan that August.

Kisten played all of 1989 at Springfield, where he saved 37 games. He then played most of 1990 at AA Arkansas. He also saw nine relief appearances in 1990 at AAA Louisville. He gave up 10 earned in 13.1 innings there.