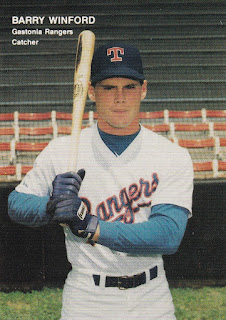 It came in spring training 1990, Ryness wrote. Winford, playing for the Rangers spring squad hit a double. Waiting for him at second was Ripken.

Winford crossed paths with Ripken as Winford went into his second season as a pro. Assigned to single-A Gastonia, Winford returned for just one more pro season.

Winford's career began in 1989, taken by the Rangers in the 12th round of the draft, out of Mississippi State University.

At Mississippi State, Winford still holds the record for career catching assists, with 110. He was names second-team All-SEC in 1989.

Winford singled and scored the game-winning run in an April 1987 game. He then broke his jaw on a play at the plate, but he made it back to the field by that May. Then, he knocked in a run on a double in a contest the next month.