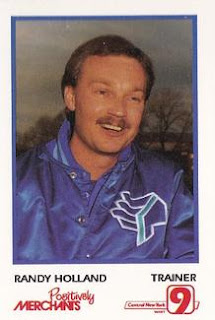 Randy Holland spent nearly two decades in the Blue Jays system as a trainer, helping players heal from injury and return to the field.

He's spent his years since helping players get to the field with partner Roy Silver at The Winning Inning Baseball Academy in Clearwater, Fla.

He's also helped some players heal in different ways so they could get back on the field, too, including working with Silver on one of baseball's biggest comeback stories, Josh Hamilton.

"Roy and Randy ran after-school and other group activities for kids in the area," Hamilton told Baseball Player Magazine in 2009. "This became one of my favorite things about the place. Being around the little kids reignited my love for baseball and made me realize why I had to give myself another chance to get back into the game."

Holland started as a trainer a quarter century earlier, out of Portland State University. He graduated there in 1983 and immediately began as a trainer with the Blue Jays.

He actually started in 1982 in the rookie Gulf Coast League and stayed there for three seasons. He served at single-A Florence in 1985 and then at AA Knoxville in 1986 and 1987. He also obtained his masters in 1987.

Holland arrived at AAA Syracuse in 1988 and was named trainer for the inaugural AAA all-star game. Holland served five total seasons at AAA, then later in an organizational capacity.

Soon after his time as a trainer, Holland joined up with Silver at The Winning Inning, where he works on player conditioning.

In 2001, he and Silver helped a young player of theirs through tragedy, future Rookie of the Year Chris Coghlan. Coghlan had been in their program when his father died suddenly. The two responded to Coghlan's mother's call and helped him through, The Palm Beach Post wrote.