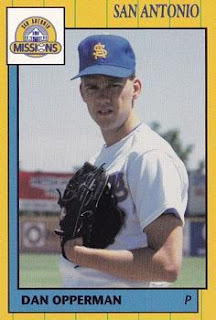 The Dodgers took Dan Opperman eighth overall in the 1987 draft, despite elbow pain he'd suffered at the end of his high school career, The Los Angeles Times wrote.

When he went to start his career, though, he immediately blew out his arm, requiring Tommy John surgery before he'd even thrown a real game pitch, The Times wrote.

"I'm wondering how I'm going to do," Opperman told The Times upon his return from rehab the net spring, "and I'm sure a lot of other people are curious, too."

Opperman's return would be rocky, though. He remained out that entire season, as well. He finally got to throw in a game the next year, at single-A Vero Beach. He made it as high as AAA, but his career lasted just four seasons.

Opperman's career began with that selection in the 1987 draft by the Dodgers out of Valley High School in Las Vegas.

The Dodgers had examined Opperman ahead of the draft and their doctor pronounced him fine. But, hours after his arrival at rookie Great Falls, the pain he'd felt at the end of his high school career returned. He required Tommy John.

Opperman responded with optimism for his future and defiance for skeptics, The Times wrote.

"If they want to write me off, let them do it," Opperman told The Times of his skeptics. "'Cause I'll just put it back in their face when I come back."

Opperman made AAA Albuquerque for 1991, but only saw 11 games and went down with another injury. This injury led to his second Tommy John surgery. He returned to AAA in 1992, but only saw six outings, the final six outings of his career.

The Las Vegas Sun later caught up with Opperman in 1999. He was 31, married with a family and in law school in New Mexico. Opperman recounted to the paper the impact of his career ending so abruptly.