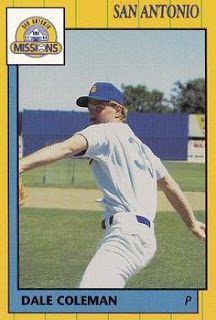 The San Antonio Missions swept a double-header against Wichita this night in May 1991.

On the front end, future Hall of Famer Pedro Martinez picked up the win for the AA Dodgers squad, according to The Associated Press.

On the back end, San Antonio reliever Dale Coleman came on and picked up the win in relief, The AP wrote.

While Martinez went on to the majors and baseball's highest honors, Coleman's career neared its end. Coleman picked up that win in his fourth professional season. It was also his last. He never made AAA.

Coleman's career began in 1988, signed by the Dodgers as an undrafted free agent out of his native Mississippi.

Coleman started with the Dodgers in the rookie Gulf Coast League. He went 3-1, with a 1.12 ERA in 19 relief outings. He also saved three.

He moved to single-A Vero Beach for 1989. He went 3-5 there over 45 outings, four starts. Those starts were the only starts of his career. He ended with a 2.54 ERA and five saves.