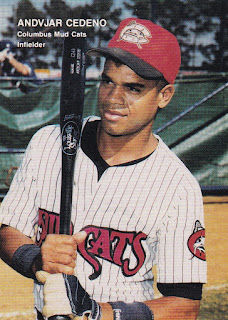 Cedeno's career began in 1986, signed by the Astros as an amateur free agent out of his homeland. He didn't start playing in the states, though, until 1988, with the Astros' team in the rookie Gulf Coast League. His brother Domingo Cedeno also made the majors.

It was in November 2000 that Cedeno was killed in the car crash. He was 31 years old.