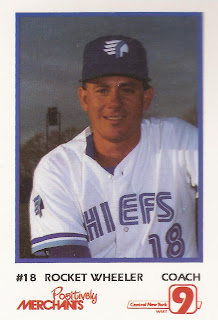 The major leagues weren't so far away for Ralph "Rocket" Wheeler and his high-A Myrtle Beach Pelicans.

And for Jason Heyward, who started 2009 with Myrtle Beach, the majors weren't, WMBF.com wrote.

"It's part of the speech I tell these guys every year, you don't know how close you are to the big leagues," Wheeler told WMBF. "Guys think, ‘here I am in Myrtle Beach, I have to go to Double-A and Triple-A before I get to the big leagues.' Believe me: your trip may be quicker than you think."

Wheeler's career in the minors began in 1977, taken by the Blue Jays in the 13th round of the draft, out of the University of Houston. In his six seasons as a player, Wheeler got as high as AA, but no higher.

His playing career over by 1983, Wheeler went right to work in the manager's office, taking the top job at rookie league Medicine Hat, returning there in 1988 and 1989.

With Medicine Hat in 1988, Wheeler told of having to protect his young pitchers.

"You don't want a kid throwing 150-200 pitches and blowing his arm out," Wheeler told The Los Angeles Times. "A kid will tell you he's feeling fine, but you know when he's tiring. You have to protect them."

Wheeler served as hitting coach at AAA Syracuse for four years through 1993. By 1995, he was managing again, with the Blue Jays Gulf Coast League team.

He also soon started collecting awards. In 1996, with St. Catharines, Wheeler won league Manager of the Year honors. He did the same with Dunedin in 1999 and Myrtle Beach in 2008. He also managed his Rome Braves to the South Atlantic League title in 2003.

Among the players on that 2003 Rome team was catcher Brian McCann. Wheeler told MLB.com in 2009 that when he first saw McCann, Wheeler knew he had talent.

"He had a good year that year," Wheeler told MLB.com of 2003. "He knew what he wanted to do at the plate. Usually, you get a young kid coming up like that, they just want to hack. ... As an 18-year-old, he drew a leadoff walk in the game we won for the championship."

Wheeler stayed with Rome for three seasons, moving to Myrtle Beach for five seasons. For 2011, Wheeler was promoted, to the managing job at AA Mississippi.