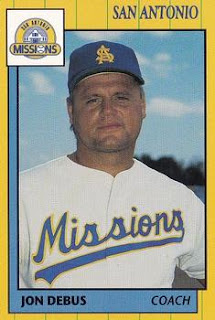 The occasion was Debus' promotion after three seasons as a roving instructor to major league bullpen coach.

"I saw how Jon went about his business the last three years and was very impressed," Tracy told The Times. "It was time he was rewarded for his loyalty to the organization."

Debus' loyalty spanned a quarter century with the organization, as a player, manager and coach. His time as a player spanned a decade. He made AAA, but didn't make the majors.

Debus' career began in 1980, taken by the Dodgers in the 21st round of the draft out of the University of St. Francis in Illinois.

Debus started with the Dodgers at rookie Lethbridge. He hit .333 in 62 games. He then moved to single-A Vero Beach and single-A Lodi. He hit .325 at Lodi, with 16 home runs.

He briefly made AA San Antonio and AAA Albuquerque. He then got extended trips to Albuquerque in 1984 and from 1986 through the end of his career in 1989. He never saw Los Angeles.

Debus made the jump to coaching in 1990, returning to San Antonio. He made his managerial debut with rookie Great Falls, back in the same league where he played with Lethbridge.

"It's kind of like playing again," Debus told The Lethbridge Herald of his new job as manager. "It's the closest thing to playing you can do."

Debus managed at Great Falls for two seasons, then Vero Beach for three. He served as hitting coach at Albuquerque for 1997 and 1998 and started as roving catching coordinator in 2002.

In 2002, he saw newly drafted Dodgers third baseman Russell Martin and pegged him as a catcher. Martin embraced the switch and became an all-star at the position.

"I said, 'Hey, this guy's a pretty good third baseman — why do you want to mess with that?' " Collins told The New York Times years later. "But Debo knew what he was doing. Martin had the kind of athletic ability to pull it off."