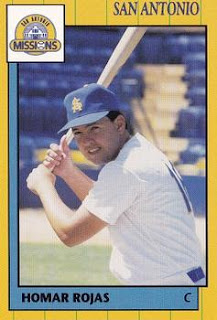 Rojas had managed Hermosillo until his ouster the week before, according to the site.

"He's a man of baseball," Castilla told OurSportsCentral of Rojas, "a man I respect very much, and yes it was a surprise to hear about that."

Rojas earned that praise in a baseball career that spanned three decades, a long stint as a player and a post-playing career as a manager. As a player, he spent four seasons in the Dodgers organization, but never made the majors.

Rojas' career began in Mexico in 1982. He played for Monterrey over two seasons, then Mexico City for three.

The Dodgers then purchased his contract from Mexico City for 1987. He played that year between single-A Bakersfield and AA San Antonio. He hit 230 over 31 games.

He moved to single-A Vero Beach for 1988. He hit 274 there over 91 games. The catcher played 37 games in 1989, including one at AAA Albuquerque. He threw out a runner in a July game for San Antonio.

Rojas then returned to Mexico City and hit Monterrey for 1992 and 1993. He played for the Mexico City Reds and Yucatan through 1997, then the final seven seasons of his career with Oaxaca.