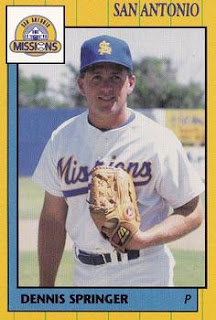 In his second major league start, knuckleballer Dennis Springer made it into the sixth inning. In his first start, he'd made it that far, but given up eight hits and three earned runs.

In this start, he hadn't given up any earned runs, or any hits.

"I was aware of what was happening," Springer told The Allentown Morning Call after that September 1995 game. "It becomes obvious when people start avoiding talking to you."

Springer eventually lost the no-hit bid with two outs in the sixth. His Phillies would also go on to lose the game, Springer not factoring into the decision.

But Springer made it to that game after almost a decade pitching in the minors, learning and perfecting that oddest and most maddening of all pitches, the knuckleball. And, after those nine seasons spent in the minors, Springer would go on to a major league career that would span eight seasons, not ending until 2002.

Springer's career began in 1987, drafted by the Dodgers in the 21st round out of Cal State Fresno. He first made it above single-A in 1989, playing at AA San Antonio and AAA Albuquerque. He made the same split in 1990, though pitching in only two AAA games, the rest at AA.

By 1992, Springer was learning the knuckleball. That spring, Springer and another Dodgers prospect were called in to watch and learn from another knuckleballer, Tom Candiotti, The Los Angeles Daily News wrote.

Springer went 8-14 that year in 1992, splitting the season again between AA and AAA, with a combined ERA of 4.79. He was still learning the knuckleball in 1993, with mixed success. He posted an ERA that year of just under six.

It wasn't until 1994, when Springer signed with the Phillies, that he was got on his route to the majors, and becoming one of a select few pitchers who go by the name "Knucksie."

Called up in September 1995, Springer started four games, losing three. He was the first pure knuckleballer for the Phillies in nearly 50 years, The Associated Press wrote. Two of his knucklers also got past the catcher, leading to at least one score.

Having missed out on a win in that second start, Springer didn't get his first major league win until July 1996, then playing with the Angels. He had also marked a turning point in his pitching career. He was no longer a part-time knuckleballer. It was full-time all the way.

The Angels had him make the switch, The Los Angeles Times wrote. That spring, he went more than 14 innings before giving up his first run. His first victory came against the Brewers, giving up three runs in 7.2 innings, all the while keeping Milwaukee off balance with his knuckler.

"It was a long wait, but this feels outstanding," Springer told The Times. "It's taken a long time to get here, but it's worth it."

Niekro's main advice? Throw the already slow pitch slower. The result was a 2-0 victory over the Indians.

"Today my No. 1 knuckleball was a real slow one," Springer told The AP. "Sometimes I threw a harder one to set up the slow one. I threw minimal fastballs and changeups."

That May, Springer told The Orlando Sentinel his philosophy on his maddening pitch, a pitch that can, at best, be difficult for catchers to handle.

Springer was one to throw the pitch any time, he told The Sentinel. Pete Rose had once told him he waited for 3-0 counts, when knuckleballers went to a fastball. Springer tried to avoid that.

"You live and die with it," Springer told The Sentinel, "and hopefully, you don't die too much."

In 2001, one of his four appearances came Oct. 7, starting the final game of the season against the Giants. A first inning pitch from Springer became the 73rd pitch Barry Bonds hit for a home run that season.

During his final season with regular time, in 1999, Springer threw a complete game shutout in August, against his old team the Devil Rays. He threw his knuckler that night "as if it were attached to a string," The Sarasota Herald-Tribune wrote.