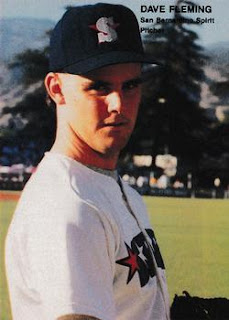 Dave Fleming had already pocketed wins by August 1992, his rookie campaign, so he went out this night for the Mariners and did the next thing on the list: He flirted with a no-hitter.

Fleming, whose play in 1992 garnered Rookie of the Year consideration, took a no-hitter against the Indians into the sixth inning. He then went the distance on a two-hit shutout.

Fleming received plenty of accolades that year. He ended the campaign with 17 wins to 10 losses and a 3.39 ERA. He also came in third in the Rookie of the Year balloting.

But, while he picked up another 12 wins in 1993, a shoulder injury ultimately limited his major league career.

Fleming's career began in 1990, taken by the Mariners in the third round of the draft out of the University of Georgia. He played his high school ball in Mahopac, NY.

The Mariners took him after he went 12-6 at Georgia, with a 2.86 ERA as he helped Georgia to the College World Series title.

In one College World Series win, Fleming threw a four-hitter for a shutout. "Under the circumstances," Fleming told reporters later, "this is definitely the biggest game of my career and the best game I've pitched."

Fleming started with the Mariners shortly after at high-A San Bernardino. He then jumped to AA Jacksonville and AAA Calgary in 1991. He debuted in Seattle that August.

Then came his 1991 campaign. By June, he'd racked up nine wins to a single loss. Fleming couldn't figure out what was happening, according to The AP.

"It's getting a bit ridiculous," Fleming told The AP after a 2-1 win over Texas. "(Rafael) Palmeiro hit three shots that went for outs. That's how it's been this year and now I'm 9-1."

He tried to come back in 1997 with independent Waterbury and earned a spring training slot with the Yankees in 1998. He got looks at AAA that year with the Red Sox and Orioles and again in independent ball to end his career.

That spring, as he tried to make the Yankees, Fleming spoke with The New York Times about being back on the field after his hot career start and then shoulder surgery ultimately sidetracking his career.