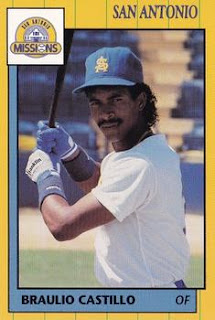 Braulio Castillo helped his Philadelphia to a 6-2 win and he did so by hitting a three-run home run - his first in the majors, according to The Associated Press.

"I'm really happy about this, I've worked so hard for this," Castillo told The AP.

Castillo hit that home run in his second season in the majors and his sixth season as a pro. His big league career consisted of those two seasons and two total home runs.

Castillo's career began in 1985, signed by the Dodgers  as a free agent out of his native Dominican Republic.

Castillo started on the field with the Dodgers in 1987 in the rookie Gulf Coast League. He hit .200 in 49 games.

"Reggie helps me a lot," Castillo told The Times. "He's teaching me to hit the curveball and to stay back in the box."

He made AA San Antonio in 1990, and started 1991 back there before being traded to the Phillies. He briefly played at AAA Scranton before debuting in the majors.

"I never expected something like this to happen so soon," Castillo told The Wilkes Barre Citizens' Voice after his call-up. "I was thinking more along the lines of September when I thought I would be called up."