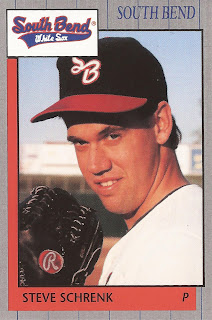 Steve Schrenk took it pitch-by-pitch and inning-by-inning in this July 1999 game for the Phillies, he told The Allentown Morning Call.

The result: A six-inning gem of a performance in his first major league start in an emergency fill-in for Phillie star Curt Schilling, The Morning Call wrote.

"I was nervous because I had some big shoes to fill," Schrenk told The Morning Call. "But, once I got going, everything I've been working 13 years for pulled me through. It's been a long haul, but I've been blessed by the Lord to be here now."

Schrenk worked those 13 years entirely in the minors. He started work in 1987 and didn't finally make the majors until July 1999. He went on to see time in two major league seasons, 52 major league games. He's since gone on to to a career as a coach, working to get others to the majors.

Schrenk's started his career as a fourth-round draft pick by the White Sox, out of North Marion High School in Ohio.

Schrenk started in the rookie Gulf Coast League. He moved to single-A South Bend for 1988, staying there for three seasons. He briefly made AA Birmingham in 1992, then made AAA Nashville in 1993.

He then largely stayed at AAA until his call-up in 1999, moving to the Orioles, Red Sox and, finally Phillies systems.

Speaking in July 2000 to The Wilkes-Barre Times Leader, the married and father of five Schrenk explained an important aspect of his longevity, having his family with him.

"I wouldn't do this if my family couldn't be with me," Schrenk told The Times Leader. "Baseball is a way of life for our entire family."

Schrenk then started his coaching career with the team that brought him to the majors. He served as pitching coach for 2004 at high-A Clearwater. He's stayed with the Phillies since, coaching at Clearwater, single-A Lakewood, in the rookie Gulf Coast League and at AA Reading. He's continuing to coach at Reading in 2017.

"This is what I've done my whole life ever since I was 5, was baseball, so it was part of my life," Schrenk told The Tampa Bay Times as he coached Clearwater in 2015. "I just want to continue it, work with kids, get them better."