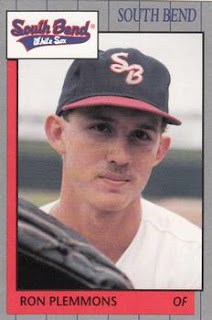 Spartanburg Methodist College prepared for the regional playoff opener in May 1989, and outfielder Ron Plemmons explained to The Spartanburg Herald-Journal some difficulties.

Chief among them, was rain interrupting the team's practice schedule, according to The Herald-Journal.

"The rain hurts," Plemmons told The Herald-Journal. "Sometimes we've played only two or three games a week. You can't get loose at the plate; it messes up your rhythm."

Plemmons kept his rhythm enough to be drafted the next month by the White Sox. He went on to play four seasons as a pro. He made AA, but didn't make it higher.

Plemmons' career began that year, taken by the White Sox in the 46th round of the draft out of Spartanburg Methodist. Plemmons is also credited as Ronnie Plemmons.

Plemmons played his first year at short-season Utica. He got into 69 games and hit .241.

Plemmons made it to high-A Sarasota in 1991, hitting .239 on the year. He singled, stole second and scored in an April game.

Plemmons' final season came in 1992 at Sarasota and AA Birmingham. He got into 15 games at Birmingham and the remainder at Sarasota. He hit .222 overall, ending his career.