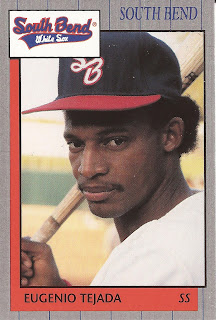 Leo Tejada had a big night in this August 1988 game and his Utica Blue Sox got the win, according to The Associated Press.

Tejada picked up three hits as the Blue Sox came back for a 5-3 win. One of his hits was the game-winner, The AP wrote.

Tejada got those hits in his second pro season. He went on to play in five. He never made AA.

Tejada's career began in 1987, signed by the White Sox as a free agent out of his native Dominican Republic. Tejada was also credited by his given name, Eugenio Tejada.

Tejada started with the White Sox in the rookie Gulf Coast League. He got into 11 games, playing in the outfield.

He then moved to short-season Utica, hitting .247 over 71 games. He broke up a perfect game in June with a double.

Tejada arrived  at single-A South Bend for 1989. He hit .174 in 75 games. He also got to play with Sports Illustrated writer Rick Wolff, who played with South Bend for three games that summer for a magazine piece.

By 1990, Tejada's average and field play had him known more for his defense, according to his Best card. He hit .243 that year, knocking in 17. He went 2 for 4 in an August game, scoring once.