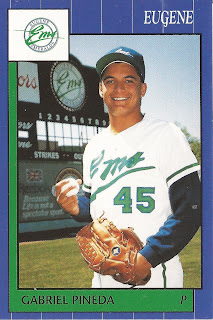 Pineda went 7.1 innings of relief in that game, allowing four runs and striking out seven to pick up the 8-7 victory, The Sun wrote.

Pineda went on from San Bernardino to the pros. His minor league career lasted two seasons. He made it to single-A.

Pineda's pro career began in 1990, signing with the Royals after being taken in the 39th round of the previous year's draft out of San Bernardino Valley.

At San Bernardino, Pineda took a loss in an April 1989 game, giving up three runs in two innings.

With the Royals, Pineda started at short-season Eugene. He went three innings in a June game, giving up two hits, but no runs. He went two innings He pitched another two scoreless innings in a later game that month.

He moved to single-A Appleton for 1991. He picked up a four-inning save in an April game. He got into 37 games overall, starting eight. He went 4-7, with a 4.91 ERA to end his minor league career.