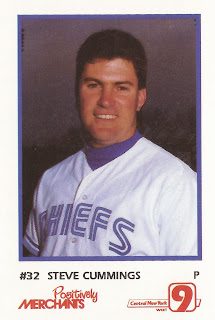 Making his first major league start on June 29. 1989, Steve Cummings wasn't sure what to expect.

"I'd be lying if I said I wasn't nervous," Cummings told reporters afterward.

But he came through with seven innings, giving up a single earned run. He also got the win, his Blue Jays backing him up with 19 hits.

Cummings was drafted by the Blue Jays in the second round of the 1986 draft, out of the University of Houston. He played that year at short-season St. Catharines, going 9-5 with a 2.04 ERA.

He played 1987 at single-A Dunedin, going an impressive 18-8 with a 2.94 ERA. Cummings helped Dunedin to a 7-0 win down the stretch with what The St. Petersburg Times described as an excellent performance.

That season earned him a promotion to AA Knoxville for 1988. There, Cummings went 14-11 with another sub-3 ERA. One of his losses came in an early May double header, after he gave up only one hit in the first game, according to The Orlando Sentinel.

''Our pitching was good enough to win both games, but you've still got to score some runs,'' Knoxville Manager Barry Foote told The Sentinel. ''In the first game we made two mistakes that were very costly. Baseball is not a very forgiving game.''

In 1989, Cummings made AAA Syracuse, then made it to Toronto. He was called up in June. Cummings got into five games for Toronto, two of them starts. He went 2-0 with a 3.00 ERA before being sent back down in July.

Cummings returned to Toronto by early May 1990, called up after the Blue Jays released veteran pitcher Mike Flanagan. He got into six games, starting two. Overall, he had a 5.11 ERA with no decisions. His final game came at Oakland May 30, giving up one run in one inning of work.

Sent back to Syracuse, Cummings finished out the year 5-3 with a 3.11 ERA. But shoulder surgery had dimmed his prospects. At season's end, Cummings was sent to the Indians. He started 1991 at at the Indians' AAA team in Colorado Springs before being traded in May to the Tigers.

In spring training 1992, Cummings made his bid to return to the majors, with the Tigers and manager Sparky Anderson was eager to get a look at the right hander, according to The AP.

In one early March game, Cummings pitched two scoreless innings. The Tigers were looking at Cummings for a bullpen spot. Despite the two years since his last look at the majors, those early nerves from 1989 were gone, he told The AP after that early March outing.

"I wasn't nervous. I didn't have any pressure on me," Cummings told The AP. "But, at the same time, I wanted to do well. I wanted to give the manager something to remember."

Cummings, however, didn't impress enough to get that bullpen slot. On March 10, Cummings gave up a grand slam. On March 25, he was better, giving up two hits over two innings. But, by season's start, Cummings was sent back down. He pitched in just five games at Toledo that year and he was done.