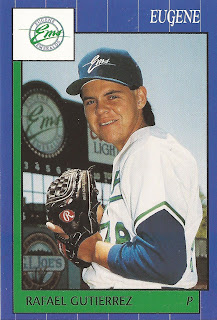 The short-season Eugene Emeralds pulled in a large early-season crowd - nearly 7,000 - and some of the Emeralds, not having played in front of so many people previously, got some butterflies, according to The Eugene Register-Guard.

One of them was Eugene reliever Rafael Gutierrez, who went three innings and gave up an earned run, The Register-Guard wrote.

"I tried to ignore it," Gutierrez told The Register-Guard afterward, "but I couldn't. I didn't know this many people would come out for a game."

Gutierrez went on to play in three more seasons in the Royals and Dodgers systems. He made it to high-A, but he never got to play in front of crowds in the majors.

Gutierrez' career began in 1990, taken by the Royals in the 27th round of the draft out of East Los Angeles College.

Gutierrez lettered in both baseball and basketball at Montebello High School in California, but he thought he had given up baseball after high school. Instead, he picked it back up at East Los Angeles and won all-conference honors both seasons he played there.

He started with the Royals at Eugene. He got into 22 games, starting one. He went 2-2, with a 3.71 ERA. He came in and picked up the final out of a crucial inning in a July game on a one-pitch fly out.

"The score was tied and it was my job to keep it that way," Gutierrez told The Register-Guard.

Gutierrez played most of 1991 with the Royals in the rookie Gulf Coast League. He also got a game at high-A Baseball City. He went 5-6, with a 3.84 ERA overall.

Gutierrez then moved to the Dodgers system and got some instruction from knuckleballer Charlie Hough. He played 1992 between high-A Vero Beach and short-season Yakima, serving on both teams as a starter. He went 7-10, with a 4.91 ERA.

He went on to pick up his degree in education and his teaching credentials at Cal State-Long Beach. Gutierrez then returned to Montebello High, first as a pitching coach and then as head coach. In 2013, he became the school's athletic director.

In 2012, Gutierrez worked to keep his team on track for a league title, according to The Los Angeles Daily News.