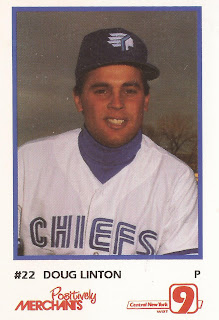 With only 14 major league appearances since 1996 and none since 1999, Doug Linton was ready to do whatever was needed of him to get back.

In spring training 2003, whatever was needed included starting against the New York Yankees.

"I'll take whatever they want to [give] me," Linton told MLB.com after having a good showing against the Bombers. "They took me on the trip yesterday. I was ready to pitch. Whatever situation they want to put me in, I'll take it. I feel I can do the job."

Linton could do the job. He made the Blue Jays that spring, making seven appearances, his final appearances in the majors.

He made Toronto in August 1992. He made his first start Aug. 13, at one point retiring 15 straight batters, according to the Associated Press account. Linton went on to get his first win, after the Blue Jays scored two late to break a tie.

"It's a great feeling," Linton told reporters afterward. "But if we didn't score two runs in the eighth, I wouldn't be talking about my first win."

Linton appeared in eight games for the Blue Jays, Linton finished 1-3 with an ERA north of 8. He returned to Toronto for four more games in 1993, before being taken off waivers by the Angels. The next year, Linton was with the Mets, pitching in 32 games for New York. He also had his best ERA, at 4.47.

"I just wanted to get the first guy out every inning," Linton told reporters. "You look at their line-up, it's kind of astonishing. I feel like every time out, I've got to prove myself again."

Linton spent 1997 and 1998 away from the majors, missing all of 1997 with ligament transplant surgery, according to the Baltimore Sun. He returned in 1999 for 14 appearances with Baltimore. He also got his first win in three years Sept. 4 against the Indians.

Linton pitched seven innings in the game, then waited in the dugout to see if he'd get the win, The Sun wrote.

"It seems like a big relief," Linton told The Sun. Linton told of working with pitching coach Bruce Kison on staying back and not trying to jump out too much.

"He basically said to limit myself to one less cup of coffee before I go out there. I kind of get excited and everything starts rushing forward," Linton told the paper. "[Bullpen coach] Elrod Hendricks said the same thing. It's more than one person telling me the same thing. I finally got over the stubbornness of trying to do it on my own."

Linton then went through the Rockies, Mets and Braves AAA clubs. His affiliated playing days ended in 2004, with the Royals system. But his playing days didn't end before Linton pitched in winter baseball with the Dominican Republic the next February, pitching seven scoreless innings in a win that month.

Linton has since gone into coaching, serving as pitching coach this year for AAA Colorado Springs.