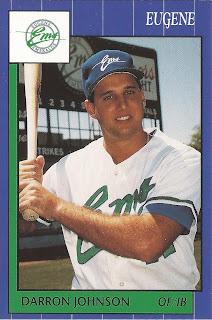 Darron Johnson started 1990 slow for short-season Eugene. But on this night in July, he put it all together, according to The Eugene Register-Guard.

He did so by hitting a game-winning grand slam in the bottom of the ninth to give his team a one-run victory, The Register-Guard wrote.

"I just wanted to hit it hard," Johnson told The Register-Guard afterward. "I did this same thing, hitting a grand slam in the bottom of the ninth, last year. This one, this is the one I'll remember."

Johnson hit those grand slams in his second and third seasons as a pro. That season with Eugene was his third season, he didn't get to come back and try for a fourth.

Johnson's career began in 1987, taken by the Royals in the 11th round of the draft out of Santa Fe Community College in Florida.