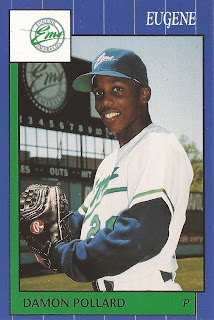 Damon Pollard threw his eighth complete game on the year for Southern Mississippi and he might have helped his club secure a tournament slot, The Jackson Clarion-Ledger wrote.

He did so by allowing six hits, but none in the final four innings, The Clarion-Ledger wrote.

"This was by far my biggest win," Pollard told The Clarion-Ledger. "I've pitched in big games before like against Mississippi State and LSU, but I've never been able to win."

Pollard's career began in 1990, taken by the Royals in the 14th round of the draft out of Southern Mississippi.

Pollard threw another six-hit complete game for Southern Mississippi in an April 1990 game. He stumbled in a May 1990 contest, allowing four runs in the first inning of a blowout loss.

"I didn't have my slider or my curve," Pollard told The Clarion-Ledger. "All I had was my fastball. And they hit it well."

Pollard started with the Royals at short-season Eugene. He got 14 starts, went 3-3 and turned in a 3.34 ERA. He picked up his second win in a July game, going six innings and giving up one earned, on a home run.

"It was a good pitch," Pollard told The Eugene Register-Guard of the home run. "It was a fastball on the outside of the plate and he drove it far."

Pollard moved to single-A Appleton and high-A Baseball City for 1991, turning reliever for part of the year. Back at Baseball City in 1992, he turned closer. He saved 13 games and had a 2.66 ERA.

He then spent a season in independent ball, saving 14 for the Northern League champion St. Paul Saints. Pollard struck out the final batter to win the title.