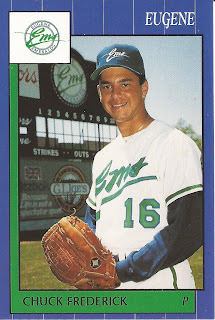 Chuck Frederick had a tough seven inning in this July 1990 game for short-season Eugene, according to The Eugene Register-Guard.

His team trailing, the reliever could only record one out while being tagged for three earned runs, The Register-Guard wrote.

"When you're only down 2-1 like we were, then you've got to go after the hitters," Frederick told The Register-Guard afterward. "And when you do that, a little mistake will get hit hard."

Frederick went after the hitters in that game and for the rest of the season. But he could only go after them in that campaign. He played a single season as a pro.

Frederick's career began and ended that year in 1990, taken by the Royals in the 29th round of the draft out of Michigan State University. He also played at Parkland College. Frederick was also credited as Chuck Frederick.

Frederick played both baseball and football in high school. He played in a high school all-star game at Tiger Stadium, The Register-Guard wrote. He then played a season at Parkland, where struck out enough to make the team's record book at the time.