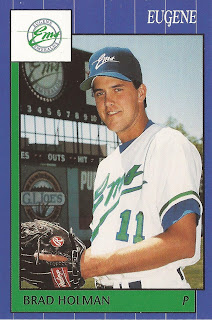 His pitching coach there, Bryan Price, couldn't have been happier for the reliever, The Daily Press wrote.

"He's the high point of the season for me as a coach," Price told The Daily Press of Holman. "He's gone from our 12th man to our closer. That makes me feel real good, mostly for Brad. He's gone from being a filler player to having a chance to make the big leagues."

Holman went on from there to have multiple other high points. In 1993, he had 19 of them, his 19 appearances in the majors for the Mariners. He later turned in some high points as a coach himself, making the majors again with the Rangers.

Holman's career began in 1990, taken by the Royals in the 35th round of the draft out of Auburn University. Holman's brother Brian Holman made the majors over four seasons.

Holman started with the Royals at short-season Eugene. In 17 games, four starts, he went 0-3, with a 4.78 ERA. The Royals released him the next spring.

He soon signed with the Mariners and started his move to the majors. He played at high-A Peninsula and saved 10. He then hit AA Jacksonville in 1992, then AAA Calgary. In July 1993, he made Seattle.

Midway through his 19 games, Holman go hit in the head by a come-backer. He hit the disabled list with a bruised front sinus cavity, according to The Associated Press.

"Although it's scary, it's not going to stop me from pitching," Holman told The AP afterward. "If you're a carpenter and bust your finger, you've got to go to work the next day and hammer the nail."

Holman returned later that month and finished the season with a 1-3 record and a 3.72 ERA.

He played 1994 back at Calgary, then divided 13 appearances in 1995 between the Mariners, Orioles and Rockies systems. He played his final pro ball in 1996 with Amarillo.

He served 2016 and 2017 as Rangers bullpen coach in Texas, before returning to AAA in 2018 as pitching coach at Syracuse. At Syracuse, he worked with hurler Christopher Smith on his curve and his sense of urgency.