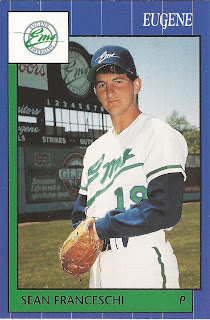 Sean Franceschi had a rough start to his pro career in June 1990, according to The Eugene Register-Guard.

Franceschi entered the Opening Day game for his short-season Eugene Emeralds in the seventh inning. Four outs later, he'd given up six hits and six earned runs, The Register-Guard wrote.

"Just trying to hit the ball hard," opposing Medford hitter Mike Muhlethaler told The Register-Guard afterward of Medford's success. "It wasn't like batting practice, but we did hit the ball hard."

Franceschi brought his ERA down somewhat from that Game 1 high, but it wasn't enough for him to continue. Franceschi played that season, but didn't get another.

Franceschi's career began and ended that year, taken by the Royals in the 34th round of the draft out of the University of New Orleans. He also played at Gulf Coast Community College and graduated from Taft High School in Florida.

Franceschi went 7-0 in 1986 at Leon. He then picked up an April 1988 win for Gulf Coast with the backing of 15 hits. At New Orleans, he counted as a career highlight beating eventual College World Series participant Mississippi in spring 1990.