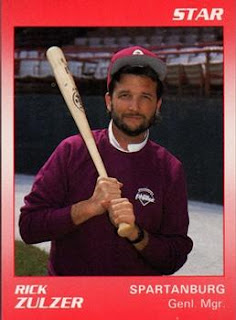 One of Josh Hamilton's first stops in professional baseball - one that came before all his personal troubles - was at short-season Hudson Valley in the New York-Penn League in 1999.

He was the top-overall pick of the Devil Rays and he showed it on the field, Hudson Valley staffer Rick Zolzer recalled years later to MLB.com, after Hamilton returned to the game and made the World Series with the Rangers.

"I've been working in baseball for a long time, and I know when someone has 'it,'" Zolzer told MLB.com. "He was a young skinny kid, a restless kid who had ungodly ability. He was an absolute freak. The ball made a different sound coming off the bat when he hit it."

Zolzer spoke to MLB.com in 2010, having spent much of the previous two decades in pro sports. He'd been a general manager public address announcer and radio announcer in the minors.

He's spent three seasons as the public address announcer for the NBA's New Jersey Nets, as well as time with Army football. He works as a sports reporter and he even does weddings.

His time as a PA announcer with the Renegades in Hudson Valley included a unique distinction that came in 1995 when the announcer Zolzer was himself ejected from a game by an umpire.

Zolzer grew up in New York's Hudson Valley in Poughkeepsie. According to his Best card back, he served as a player-manager for a summer baseball team there. In 1990, he served as the general manager for the single-A Spartanburg Phillies.

By 1994, he was back home in the Hudson Valley, serving as announcer for the new Renegades in Fishkill. It was Aug. 1, 1995 that he made history with his ejection, according to Hudson Valley Magazine.

The umpire that night called several balks and Zolzer began to lead the crowd in a balk chant. That brought a warning, the magazine wrote, and Zolzer stopped. A song played later in the game included a lyric that resembled the chant and Zolzer was tossed.

From 2001 to 2004, Zolzer added NBA announcing duties to his resume as announcer for the Nets. The New York Times once noted his team announcement, "Introducing YOUR New Jersey Nets." before games.

With the Renegades, Zolzer has risen to be the club's vice president. He also has continued with his announcing duties. In 2012, he gained notice from Ballpark Digest for announcing a game from his home pool via Skype.

Zolzer was promoted to Renegades vice president in 2013, a job he continues to hold in 2015.

"Being named Vice President of the Renegades organization is a ridiculous honor," Zolzer told MiLB.com after being promoted. "I have had no off switch for the 'Gades and enjoyed being a part of the team 24/7 over the past 20 years. I will always have the utmost passion for this organization and am thankful for this opportunity as I look toward the next 20 years."