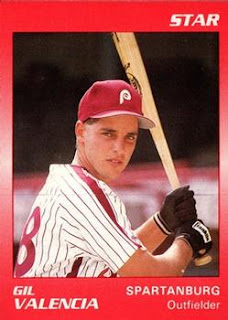 It took Gil Valencia a while, but he finally signed.

After being taken by the Phillies as the 65th pick in the 1988 draft, Valencia first declined and went off to college. Then, the next May, Valencia signed, choosing to try his hand with Philadelphia and the team's rookie camp in Florida, according to The Los Angeles Times.

"I'm dying to go down there, see the talent and take my shot," Valencia told The Times that May. "It was an offer that really appealed to me."

Valencia did take his shot, but it didn't end up as he hoped. His shot ended up lasting just two seasons, getting to single-A, but no higher.

Valencia's pro career began that May, when he signed with the Phillies out of Oxnard College. He'd been drafted by Philadelphia out of Camarillo High in California.

Soon, Valencia was playing professionally at rookie Martinsville. In 47 games, he hit .287 with 13 RBI.

Down the stretch, though, Valencia showed some spark, riding an 18-game hitting streak to season's end, and posting an August batting average of .364, according to The Philadelphia Daily News. It was enough for Valencia to win organization minor league Player of the Month honors.

For 1990, Valencia moved to single-A Spartanburg, playing 37 games there and another 26 at short-season Batavia. Between the two, though, he hit just .164. In early April, though, Valencia started a late Spartanburg rally with a single.

But it was Valencia's final year as a pro, his shot not working out.

Back in college, though, in 1988, Valencia's father, also Gil Valencia, told The Times of his son's desire to eventually try his hand at the pros.

"Baseball," the father told The Times, "is what he wants to do."