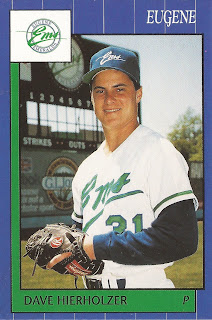 Dave Hierholzer joined the Royals organization after an extended stint in college. With that the 24-year-old playing at single-A knew he had to produce, he told The Appleton Post-Crescent in May 1991.

"I do feel pressure when I'm sitting around at home," Hierholzer told The Post-Crescent. "But at the ballpark, I don't worry about it. I think I can do better than the younger guys."

Hierholzer pitched well enough that year as he picked up multiple early wins in relief, which The Post-Crescent noted earned him the name "The Vulture." But he didn't pitch well enough for another shot. That season, his second in the pros, turned out to be his last.

Hierholzer's career began in 1990, taken by the Royals in the 38th round of the draft out of Kansas State University. He also played at Johnson County Community College and was sometimes credited under his formal name, David Hierholzer.

At Kansas State, Hierholzer twice won all-conference honors. He also shutout Southern Mississippi and Oklahoma University on back-to-back outings and went 40-consecutive innings without giving up an earned run, according to The Eugene Register-Guard.

He beat Oklahoma in an April 1989 game on a six-hitter, for Kansas State's first win there in seven years.

With the Royals, Hierholzer started at short-season Eugene. He got into 32 games in relief, won four and saved nine. He also turned in a 2.23 ERA.

He moved to single-A Appleton for 1991. Early that season, Hierholzer picked up one of his vulture wins against Cedar Rapids as his Appleton team came back for a victory.

"I was pretty lucky to get a couple of runs and get the first vulture win of the season," Hierholzer told  The Cedar Rapids Gazette. "Last year I was the closer at Eugene. "(After the go-ahead homer) I sat on the bench and thought ‘I’m the offensive player here. They have to swing the bats. All I have to do is throw strikes.'"