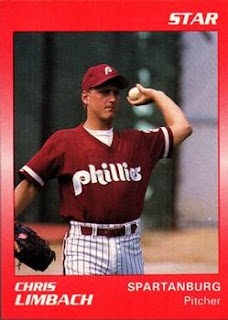 Chris Limbach came on to close out the eighth. He ended up staying on, striking out the side in the ninth and picking up his first save.

"I figured if I gave up a hit in the ninth, I was coming out," Limbach told The Spartanburg Herald-Journal after that May 1990 contest. "I was getting behind in the count, but I came with my curve, which is my best pitch. I wasn't going to get beat on fastballs."

Limbach was in his fifth professional season that year in 1990, but he had yet to reach higher than single-A. He went on to make AA Reading the next year, his sixth as a pro. But, in a career that spanned eight seasons, Limbach would never make the majors.

Limbach's career began in 1986, taken by the Phillies in the 21st round of the draft, out of Warren Central High School in Indianapolis. With Warren Central, Limbach helped his team to a 29-2 record and a top ranking his senior year.

With the Phillies, Limbach started at short-season Bend, getting into 19 games, mostly in relief, posting a 3.89 ERA. He returned to Bend for another 41 outings in 1987, posting a 3.70 ERA.

In August 1987, Limbach went 3.1 scoreless relief innings, picking up a win. By September, Limbach had the Northwest League's record for number of appearances, and the team's Most Valuable Pitcher award.

"Limbach could win a ball game for a pitcher, and everybody in the league knew it," Bend manager Mel Roberts told The Bend Bulletin after the award announcement. "Teams knew if they wanted to get us, they'd have to do it before the seventh inning."

From there, Limbach moved to single-A Clearwater, getting into 43 outings, posting a 2.81 ERA. He then ran into a shortened 1989 campaign, and spent 1990 at single-A Spartanburg.

He didn't make AA until 1991, with 18 outings at Reading. He also got 39 outings that year back at Clearwater, picking up six saves, picking up his sixth in June.

Limbach, though, had just two more seasons. He played 1992 completely at Reading, posting a 3.14 ERA. That year was his last with the Phillies. He ended up playing as his last as a pro in 1993, with the Royals at AA Memphis.