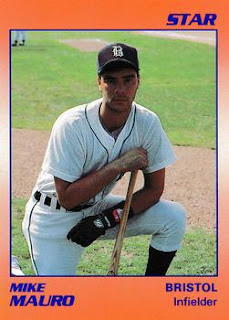 In a story about his hockey-playing son, Michael Mauro touched on his own sports past and present - in baseball.

"Baseball has given me some of the most rewarding and heart-wrenching stages of my life," Mauro told The Staten Island Advance in 2018. "The ups and downs keep me motivated, but most of all the relationships I have made with teammates and players and the coaches I am associated with, the friendships we share are priceless."

Baseball gave Mauro a brief pro career, just a single season. But he went from there on to a long coaching career - and a career in law enforcement.

Mauro's pro playing career began and ended in 1990. The Tigers signed him as an undrafted free agent out of John Jay College of Criminal Justice. He is also credited as Mike Mauro.

Mauro started with the Tigers at rookie Bristol. He got into 18 games and hit .157. He also played 11 games that year at short-season Niagara Falls and didn't pick up a hit. That marked his only season as a pro.

Mauro then put his criminal justice schooling to work as he joined the New York City Police Department.

Mauro stayed at Tottenville into 2009, when he joined the College of Staten Island as an assistant. He then took over as head coach at Staten Island in 2009, a job he continues in 2018.

He described his coaching style to The Advance in 2010.