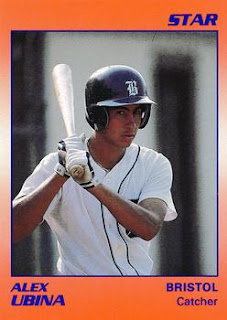 Alex Ubina gained interest from scouts in the 1989 and soon signed a professional contract. But the way in which he signed proved somewhat novel.

Ubina, a native of Puerto Rico, found himself among the first class of Puerto Rican ballplayers to be taken in the baseball draft. Prior to 1989, players from the commonwealth could be signed at will by teams independent of the draft.

Ubina's selection came in the 52nd round of the draft by the Tigers - the first Puerto Rican taken came a few rounds earlier, in the seventh.

Ubina ultimately couldn't overcome his late selection. His career lasted two seasons. He never made it out of rookie ball.

Ubina's career began that year in 1989, when the Tigers selected him out of Manuela-Toro High School in Caguas, P.R. Ubina is also credited as Alex Ubinas.

Ubina started with the Tigers at rookie Bristol. He first hit the field in 1990, the year after the Tigers took him in the draft.

He got into 39 games that first year. He played 21 of those games at catcher. He even got six outings as a pitcher. At the plate, Ubina hit .256 and knocked in eight runs. On the mound, he gave up five earned in 10 innings of work.

Ubina returned for 1991 and he returned to Bristol. He got into 12 games, mostly as catcher. He picked up eight hits in 27 at bats, ending his career.