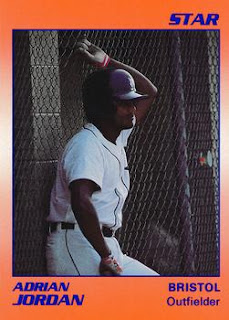 The Detroit Free Press checked in on the farm clubs in July 1990 and Adrian Jordan appeared to be playing well.

Having made it to short-season Niagara Falls, Jordan picked up four hits in his first nine at bats, according to The Free Press. He also scored three times.

Jordan, however, would cool down from that quick start. After 31 games, his average dipped to .213. After the season, his brief career was done. Jordan played just that one season. He didn't return for a second.

Jordan's short career began and ended that year in 1990, signed by the Tigers as a free agent out of his native Venezuela. He attended Jose Zilva High School in Zulia, Venez.

Jordan started his Tigers run at rookie Bristol in the Appalachian League. He got into 16 games there. In 49 total at bats, he picked up just five hits.

He then soon moved to short-season Niagara Falls. In his time there, he knocked 19 hits overall in 89 at bats for that .213 average. He also picked up five RBI and two stolen bases.

Between the two clubs, Jordan appeared in 47 games and hit just .174, marking the end of his career.