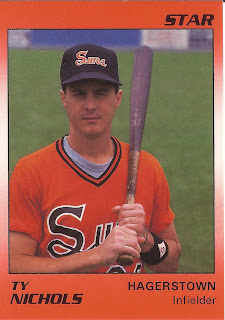 Ty Nichols tried to explain to Oklahoma TV station KOTV 6 how he went about his job.

Nichols' job then was as an area scout for the Toronto Blue Jays and on this summer day in 2009, he was scouting a recent Blue Jays draft pick at a high school summer league game.

"You're watching them run, throw, catch, field and hit - all the tools," Nichols told KOTV of what he was looking for. "If those start to add up and they show major league tools, you start paying more attention. You give all the kids an opportunity."

Nichols' pro career began with his selection by the Orioles in the 24th round of the 1984 draft out of Dodge City High School in Kansas.

Nichols grew up the son of Lance Nichols, who played seven seasons in the 1960s in the Dodgers' organization and later managed in the minors with the Expos and Orioles. The year before his son was drafted by Baltimore, the father managed at AAA Rochester.

With the Orioles, Ty Nichols started at rookie Bluefield, hitting .207 in 63 games. For 1985, he played at single-A Daytona Beach and at short-season Newark. Between them, he hit just .188, knocking in 33.

That year at Hagerstown was his final year in pro ball. He returned to Hagerstown the next summer, long enough to get into that year's team set, but he isn't credited as playing a game. Nichols then went on to his career as a scout.