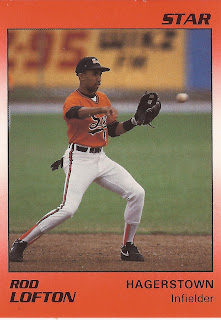 Rodney Lofton had speed. But he was reluctant to fully take advantage of it. That was essentially what the sentiment of his manager at AAA Rochester in 1992, according to The Baltimore Sun.

"If he gets on base," Narron told The Sun, "he'll play in the big leagues because of his ability to play defense and run the bases."

Whether it was Lofton's reluctance to bunt, or some other reason, Lofton never made it to the big leagues.

Lofton was playing in his fifth year of professional ball. He was drafted by the Orioles in the 13th round of the 1988 draft.

Beginning at short-season Erie, Lofton went on to play at single-A Frederick in 1989, making the Carolina League All-Star team that year.

Lofton made AA Hagerstown in 1990, getting his first taste of AAA Rochester that same year. Lofton was credited with stealing 27 bases that year. In May, The Schenectady Gazette noted Hagerstown's speed, citing Lofton and two other team members topping the stolen base list.

In 1991, that speed shined. Lofton, returning to Hagerstown, stole 56 bases for the Suns, making the Eastern League All-Star team. By early August, Lofton had 48 steals, 13 of those third base, according to The Sun. The previous team record was 38.

Lofton also hit a home run in August, notable in that he hadn't hit one before, in 1.385 at-bats since 1988, according to The Sun.

Lofton split 1992 between Hagerstown and Rochester, slowing down to 21 total steals. He also hit just .235 with Rochester and had an on-base percentage of .279.

It was enough for the Orioles to trade Lofton to the Reds. After a brief stay, Lofton moved on to the Brewers system, where he would end his career. His final year was 1995, with AAA New Orleans. He hit just .217 and stole only nine bases.