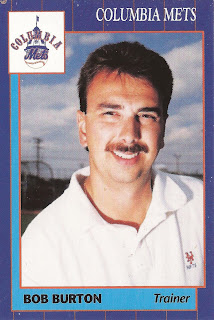 The young Wausau trainer turned out to be OK, but Bob Burton gave his team a scare during an early 1989 practice session, according to The Wausau Daily Herald.

Burton collapsed and was rushed to the hospital, The Daily Herald wrote.

"We gave him a few days off," Timbers' ' General Manager Jack Roeder told The Daily Herald. "It apparently was just mental and physical exhaustion. He'll be back with us on Wednesday."

Burton was starting his career as a trainer that year. He graduated the previous year from the University of Iowa with a degree in exercise science, and an emphasis in athletic training.

He went on from Wausau to serve as a trainer in the minors for several years before he moved into sports medicine and later briefly returned as a trainer in independent ball.

Burton got his first taste of training in school. He served as a trainer for the University of Iowa football team.

Burton later received his Masters' in health services administration from Central Florida and became a director of sports medicine in St. Lucie.