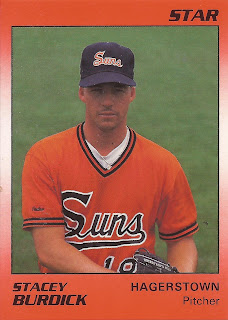 Stacey Burdick's performance earned him tournament MVP, pitching 13 innings and giving up no earned runs, according to The St. Petersburg Evening Independent.

He earned that honor while pitching his Pinellas County team to the 1985 National Baseball Congress national tournament at Wichita, according to The Evening Independent.

"A lot of batters were looking for the fastball, and the slider looks like a fastball until it drops off at the last second," Burdick told The Evening Independent. "Mostly, that's how I got people out in Tampa."

Burdick went on to turn pro in 1986, signed by the Orioles as an undrafted free agent. But, while he worked to get people out for six professional seasons, he never got the chance to do so in the majors.

Burdick signed with the Orioles out of Hillsborough Community College and Pinellas High School in Florida.

With the Orioles, Burdick started at rookie Bluefield, going 4-3 in 12 starts there, with a 6.75 ERA.

He remained in single-A for 1989, playing at Frederick, but it was a brief season, just nine outings. In Burdick's first start that year, he went five innings, giving up three hits and picking up the win.

Back at Hagerstown in 1991, Burdick picked up 26 outings, 21 starts. He also went 11-4, with a 2.99 ERA. In June, he went seven innings in one outing, giving up just four hits. But it was Burdick's final season as a pro, his career ending after six seasons.