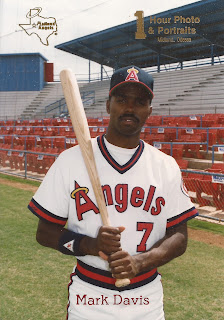 In the middle of his first major league spring training in 1989, Mark Davis knew he wouldn't make the big club in Chicago, he told The Chicago Tribune.

The White Sox minor leaguer just wanted to get himself in line to take advantage when the chance came, he told The Tribune.

"I feel confident. I feel like I belong," Davis told The Tribune. "My goal is to do well enough here that if they need me during the season, they won't be afraid to call me up."

Davis didn't get called up that year or the next. But he did get his call in 1991 - and made it to the plate twice. Those two plate appearances marked the extent of his major league career.

Davis, however, has gone on to use his confidence in another field - as an attorney in Los Angeles.

Davis' baseball career began in 1986, taken by the White Sox in the 12th round of the draft out of Stanford. Davis is the brother of Mike Davis.

Davis went to Stanford after the Cardinals selected him in the fifth round of the 1982 draft out of high school. In his junior year in 1985, Davis didn't look back at that decision.

"I have no regrets," Davis told The Los Angeles Times. "I wasn't ready for pro ball then. I'm happy I came here. Playing in college has helped me. I'm mentally tougher, more mature and much stronger physically. And the coaches have taught me to be competitive."

Davis started with the White Sox at single-A Appleton. He hit .228 in 77 games. He made AA Binghamton and AAA Vancouver in his third season. He hit .252 between them.

He did the same thing in 1989, playing between AA and AAA. He was also traded to the Angels in August, where they assigned him to AA Midland.

Davis returned to Midland for 1990, then hit AAA Edmonton in 1991. He got his call that July. He saw three appearance and those two at bats. He didn't get a hit.

He then played each of the next three seasons in Mexico, including a brief stint at AAA for the Brewers at AAA New Orleans in 1993. He's last credited as playing in Mexico in 1994.

Davis then went on to return to school. He graduated from the University of San Diego School of Law in 1997 and is a criminal defense and immigration attorney. He previously worked in the Riverside County District Attorney's Office.

He also remains involved in baseball. He's listed in 2017 as a volunteer assistant coach for the CalTech Beavers.